After lacing up the skates for one final season with the Washington Capitals in 2019, Brooks Orpik had one more major goal after his NHL career: get his diploma and graduate from Boston College. Three years later, he achieved simply that in the graduating class of 2022.

Orpik completed his diploma in communications in May while remaining in hockey operations, serving as an assistant coach at Boston College, as well as working with the Washington Capitals in Player Development.

“I’m going to finish my degree before I worry about doing anything after hockey,” Orpik had promised back in April of 2019. “That’s something I’m still committed to. I’ve got to get that done.”.

Brooks grew up in Amherst, New York and was drafted 18th overall to the Pittsburgh Penguins in 2000 after three years of NCAA hockey with Boston College. He played in 1,035 regular-season games in the NHL and was known as a leader, and true shutdown defenseman with 2,556 hits and 1,551 blocked shots. Brooks is also a two-time Stanley Cup Champion, one each with the Penguins and Capitals.

“For myself, it was definitely the whole college experience,” said Orpik in 2019. “In case hockey didn’t work out, that was a safety net… I tried to find a balance where you could be good academically. Kinesiology, I was really into.”

Not only was Brooks focused on his education before making it to the NHL, he led Boston College to its first NCAA Championship since 1949. His experience with the team, his education background, and his NHL career led him to where he is today; NCAA Champion, Olympic Silver Medalist, two-time Stanley Cup Champion, College Graduate, and is working with endless possibilities in his career after hockey.

No matter how long you played in the NHL, what your age may be, or your current level of education, the NHL Alumni Association is here to help you complete your college and university goals.

To our NHL Alumni members looking to start or complete their degrees, or for career transition aid, please contact Wendy McCreary at wmccreary@nhlalumni.com for more information. 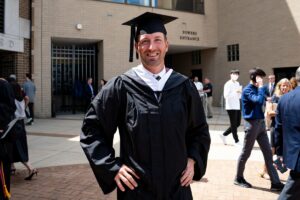